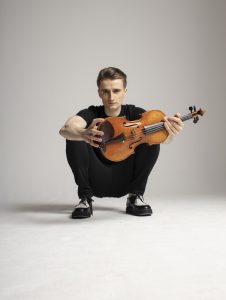 ”…I thought it was so fantastic, I just had to share it with you all. ”

Violin sensation Roberts Balanas presents a special programme of Classical works alongside a selection of his signature solo and electric violin arrangements. Programme to include works by Bach, Radiohead, Elton John, Coldplay & Paganini.

A musician of eclectic artistry, Latvian violinist Roberts Balanas enjoys a wide range of musical interests and aims to tear down the boundaries between different genres of music. Combining his background in classical music with the sound worlds of pop, rock and funk, his solo violin arrangements have amassed millions of views across the web.

This year saw the sold-out debut of Balanas’ Solo Show at London’s EartH Theatre and OMEARA as well as solo performances at Bridgewater Hall, The Anvil and numerous appearances on BBC 1, Classic FM and BBC 3.

Roberts performs on a 2021 violin by Paul Belin as well as a custom made 6 string electric violin.

Drink deal tickets are unassigned seats in the mezzanine area including a glass of wine, a beer or a soft drink. Seating is first come first serve. All other tickets include the three course meal, which is served after the concert is over at around 8:00pm in the ground floor restaurant area.