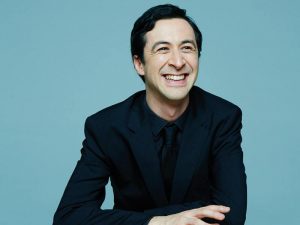 Tom Poster is a musician whose skills and passions extend well beyond the conventional role of the concert pianist. He has been described as “a marvel, [who] can play anything in any style” (The Herald), “mercurially brilliant” (The Strad), and as having “a beautiful tone that you can sink into like a pile of cushions” (BBC Music).

During the 2020 lockdown, his #UriPosteJukebox series with Elena Urioste – featuring Tom as pianist, arranger, multi-instrumentalist, writer, curator, backing dancer and snowman – brought a staggeringly diverse selection of music to audiences across the world through 88 daily online performances, for which the duo won the Royal Philharmonic Society’s Inspiration Award.

Tom is co-founder and artistic director of Kaleidoscope Chamber Collective, appointed Associate Ensemble at Wigmore Hall in 2020. With a flexible line-up featuring many of today’s most inspirational musicians, and an ardent commitment to diversity through its creative programming, Kaleidoscope broadcasts regularly on BBC Radio 3 and has recently been ensemble-in-residence at Cheltenham Festival, Kettle’s Yard and Ischia Music Festival. Its debut album for Chandos Records, of works by Beach, Barber and Price, will be released in 2021.

Tom has performed over forty concertos from Mozart to Ligeti with Aurora Orchestra, BBC Philharmonic, Bournemouth Symphony, China National Symphony, Hallé, Philharmonia, Royal Philharmonic and Scottish Chamber Orchestra, collaborating with conductors such as Vladimir Ashkenazy, Nicholas Collon, Robin Ticciati and Yan Pascal Tortelier. He has premiered solo, chamber and concertante works by many leading composers, made multiple appearances at the BBC Proms, and his exceptional versatility has put him in great demand at festivals internationally. Tom is pianist of the Aronowitz Ensemble (former BBC New Generation Artists) and Aronowitz Piano Trio, and he enjoys established recital partnerships with Elena Urioste, Guy Johnston, Alison Balsom, Matthew Rose and the Navarra Quartet.