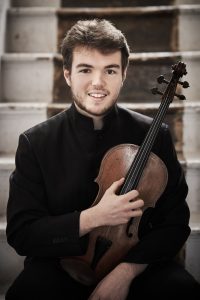 “There’s a feeling of intimacy with everyone in the room, which gives the opportunity for spontaneity and really honest musical communication” – Tim Ridout

Equally in demand as a recitalist and chamber musician, Timothy’s engagements include several appearances per season at the Wigmore Hall as well as throughout the UK, Europe and Japan. Festivals invitations encompass Lucerne, Lockenhaus, Heimbach, Bergen, Evian, Boswil Sommer, Heidelberger-Frühling, Montpellier, Aspen, the Enescu Festival and the Marlboro Academy; whilst his chamber music collaborators include Joshua Bell, Isabelle Faust, Janine Jansen, Christian Tetzlaff, Nicolas Altstaedt, Steven Isserlis, Kian Soltani, Benjamin Grosvenor, Lars Vogt and Christian Gerhaher, among many others. He also maintains a regular relationship with the Nash Ensemble.

In 2016, Timothy won 1st Prize in the Lionel Tertis Competition and was selected by Young Classical Artists Trust (YCAT). Other prizes include the 2019 Thierry Scherz Award at the Sommets Musicaux de Gstaad and 1st Prize at the 2014 Cecil Aronowitz Competition.

Timothy plays on a viola by Peregrino di Zanetto c.1565–75 on loan from a generous patron of Beare’s International Violin Society.

Tim is represented by Harrison Parrot to which all credits on this page go.