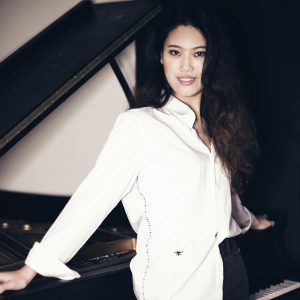 Commended for her ‘virtuosity and talent’ (Annecy Classic Festival), her ‘huge emotional range and effortless pianistic control’ (Paul Lewis), and her ‘graceful and touching’ (Emanuel Ax) approach, Siqian has appeared in concerts and recitals around the world. Uncompromising in her dedication to the musical arts and connecting with audiences, Siqian is equally content on intimate stages as she is on the major stages. Previously, she has performed at international concert halls including Beijing Forbidden City Concert Hall, Tokyo Ginza Yamaha Concert Hall, Cairo’s Arabic Music Institute and Boston’s Jordan Hall, and more unusual settings, with recitals at the London School of Economics and the ever-charming 1901 Arts Club.

A keen collaborator, Siqian actively seeks out opportunities to work with inspiring international artists. Most recently, Siqian collaborated with Latvian violinist Roberts Balanas on his debut album, which was released in December 2021 on Linn Records. Elsewhere, Siqian has collaborated with a wide range of musicians worldwide, from the principals of the China National Symphony Orchestra, to violinist Jack Liebeck.

For more than a decade, Siqian has been sharing her musical talent all around the world. In 2014, she appeared alongside Benjamin Grosvenor and David Fray in a recital at Annecy Classic Festival which was broadcast live on medici.tv, the world’s leading classical music channel. Consistently active on the festival circuit, Siqian has also given recitals at Festival d’Auvers sur-Oise, Dinard Festival International de Musique, Lancaster Music Festival, Shanghai International Music Festival, and BNP Paribas Rising Star Piano Festival.

Looking ahead to 2022, Siqian will continue to bring mesmerising and moving music to the UK’s capital. Current highlights include an evening of Debussy and Liszt at Fidelio Cafe, a duo concert with violinist Roberts Balanas at 1901 Arts Club and performances at St James’ Sussex Gardens and St Mary’s Perivale Mozart Sonatas Festival.

An enthusiastic teacher, Siqian has given masterclasses around the world, in institutions ranging from Yamaha Music China to Lancashire’s Rossall School. As an advocate of music education and a firm believer in the power of music, Siqian has also delivered charity concerts in China to support children’s musical education.

Siqian’s attitude towards music has been shaped by three exceptional piano teachers. At just 10 years old, she was discovered by Professor Huiqiao Bao – one of the most prestigious pianists in China – who proceeded to teach her for twelve years, laying a solid foundation for her career. Professor Alexander Korsantia, whom Siqian later studied with in Boston, injected Siqian with his passionate attitude to music and bold approach to life, encouraging her to step out of her comfort zone and break limits. Then, Professor Norma Fisher, whom Siqian studied with in London, brought her understanding of music to a whole new level. These teachers have helped to sculpt Siqian into a curious, driven artist, committed to always staying at the top of her creative powers.

Siqian studied Music at the Central Conservatory of Music in Beijing, becoming the first pianist to be awarded the “Best of the Best – Top and Innovative Talent” diploma and the scholarship from China’s Ministry of Culture. She then went on to obtain a Master of Music Degree with Academic Honours and a Graduate Diploma at the New England Conservatory in Boston, before receiving an Artist Diploma at the Royal College of Music in 2020. Siqian is a Yamaha Young Artist, Drake Calleja Trust Scholar (London), a recipient of the Lansum Music Scholarship (Los Angeles), the Chengxian Fu Music Scholarship (Taiwan), and generously supported by the Talent Unlimited Foundation (London).