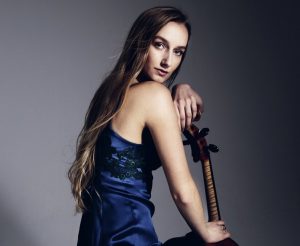 This season includes performances of the Brahms Double Concerto with her sister violinist Kristine Balanas and the Barcelona Symphony Orchestra at L’Auditori in Barcelona, Saint-Saëns Cello Concerto No.1 CD recording with Linn Records, as well as performances of Gulda, Kraft and Haydn cello concertos across Europe.

Together with her siblings, violinists Kristīne and Roberts, Margarita is the 2021 Artist-in Residence at Concert Hall ‘Cesis’. They gave their first ‘3 Balanas’ performance with Sinfonietta Riga and conductor Ben Palmer and performed in Peteris Vasks 75th Jubilee Concert with conductor Andris Poga and Latvian National Symphony Orchestra. During the pandemic, 3 Balanas founded ‘Balanas Classical’, promoting classical music through innovative concerts, workshops and masterclasses. In December 2020, they held their first charity event for the young musicians in Latvia – ‘Balanas Sisters and Roche Christmas Charity Masterclasses’.

In Spring 2020, Margarita launched her first short-film ‘Pianissimo’ which was screened at ‘Peteris Vasks Festival’ and ‘International Cello Cesis Festival’. City Music Foundation Artist 2020, Margarita was the recipient of the prestigious Bicentenary Scholarship 2019-2020 at the Royal Academy of Music where she studied with Mats Lidström. Since 2014 her mentor was cellist Lynn Harrell.

Margarita is a prizewinner of numerous international competitions, and is grateful to the Drake Calleja Trust, the Countess of Munster Musical Trust, the Craxton Memorial Trust, the Tillett Trust and the Hattori Foundation.

Margarita plays the Charles-Adolphe Gand ‘Auguste Tolbecque’ 1849 cello generously on loan by ‘The Little Butterfly Foundation’. Camille Saint-Saëns wrote his cello Concerto No. 1 for Tolbecque who premiered the concerto on this cello in 1873. The Tel Aviv Museum of Art commissioned a short documentary about the instrument and Margarita’s performance at the Tel Aviv Museum of Art.