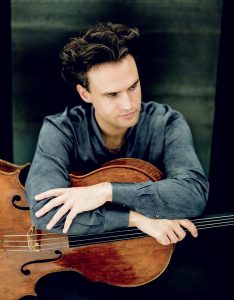 Described by the New York Times as “a musician of great technical prowess, intellectual curiosity and expressive depth”, cellist Leonard Elschenbroich has performed as a soloist with the world’s leading orchestras.

He gave his Vienna Musikverein debut on a European Tour with the Staatskapelle Dresden, his US debut with the Chicago Symphony Orchestra, his Asian debut at Suntory Hall in Tokyo, and appeared five times at the Royal Albert Hall for the BBC Proms.

A committed performer of contemporary music, Elschenbroich has commissioned several new works from composers including Mark-Anthony Turnage, Luca Lombardi, Arlene Sierra and Suzanne Farrin. He gave the world premiere of Mark Simpson’s first Cello Concerto – written for him – with the BBC Philharmonic Orchestra at Bridgewater Hall, and Brian Elias’ first Cello Concerto at the BBC Proms.

In 2012 he co-founded the Orquesta Filarmonica de Bolivia, the first orchestra to perform a Mahler Symphony in the nation’s history. Elschenbroich returns to Bolivia on a regular basis to lead educational projects and develop the orchestra. This commitment led Elschenbroich to explore the field of conducting with various orchestras across Latin America and the UK. He gave his London conducting debut, leading The Telegraph to write “Elschenbroich gave a performance of Brahms’ 1st Symphony that at times touched the heights.”