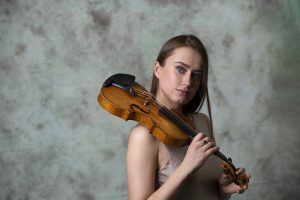 A musician of “eye-popping virtuosity” (The Times), Latvian violinist Kristīne Balanas is a 3rd prize laureate of the 66th International ARD Music Competition, 2018 Young Artist of the Year in the Grand Music Awards of her home country, and recipient of the Fundacion Excelentia Young Talent Award from Her Majesty Queen Sofia of Spain.

Soloist with some of the world’s leading orchestras (London Philharmonic Orchestra, Bavarian Radio Symphony Orchestra, Orchestre de Chambre de Paris, countless others), with frequent guest appearances at the Berliner Philharmonie, Southbank Centre, and Carnegie Hall. Her head-turning transformation from a street musician and Rock-n-Roll singer in Latvia to a graduate with honors of the Royal Academy of Music where she studied under György Pauk, and Hochschule für Musik Hanns Eisler, under Kolja Blacher, in demand for her “savage, bold, dramatic” (The Strad) playing, marks her as an entirely idiosyncratic presence on the stage.

After a highly successful  2019-20 season with performances including her debut with the Royal Philharmonic Orchestra and Andris Poga at the Cadogan Hall, the 2020-21 seasons highlights have included a nationwide tour with Kremerata Baltica, performances of the Brahms Double Concerto with her sister Margarita and Barcelona Symphony Orchestra at the prestigious L’Auditori in Barcelona, Spain, and appearances with the Saarbrücken Symphony Orchestra under Sebastian Rouland and Orquesta Clasica Santa Cecilia with conductor Lavard Skou Larsen.

In 2020 Kristīne was appointed as an Honorary Patron of BOV Joseph Calleja Foundation and during the pandemic founded ‘Balanas Classical’– promoting classical music through innovative concerts, workshops and masterclasses. In December 2020, she held their first charity event for the young musicians in Latvia – ‘’Balanas Sisters and Roche Christmas Charity Masterclasses’’.

Kristīne together with her violinist brother Roberts and cellist sister Margarita is the 2021 Artist-in-Residence at Concert Hall ‘Cēsis’. They gave their first ‘3 Balanas’ performance with Sinfonietta Riga and conductor Ben Palmer and performed in Pēteris Vasks 75th Jubilee Concert with the Latvian conductor Andris Poga and Latvian National Symphony Orchestra.

Kristīne has appeared in festivals including Festival Radio France Occitaine Montpellier and Denis Matsuev Festival ‘’Stars on Baikal’’. A regular guest soloist on Latvian National Radio Recitals, Kristīne has also performed on BBC Radio 3’s In Tune and BBC One’s The One Show and given recitals at the Purcell Room, St. John’s Smith Square and Kings Place.

Kristīne performs on a 1787 Antonio Gragnani violin, kindly loaned to her by ‘’The Little Butterfly Foundation’

Kristine is represented by Askonas Holt to which all credits on this page go.