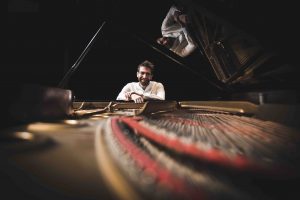 “Fidelio shows that art can be truer than life.” – Gabriele Carcano

Gabriele Carcano has performed in venues such as Zurich Tonhalle, Paris Salle Pleyel, Marlboro Music Festival, Munich Herkulessaal, Milano Società del Quartetto, Mariinsky Theatre, as well as concerts in Asia and North and South America. He worked with conductors such as Tom Kopman, Lawrence Foster, Ion Marin among others and in chamber music plays with Enrico Dindo, Stephen Waarts, Lorenza Borrani, Sergey Krilov and many more. His recordings for Ohems Classics and Rubicon Classic, solo and chamber music, have been internationally praised but the press.

Born in Turin, Gabriele from the Conservatory Giuseppe Verdi in Turin, he then continued his studies with Andrea Lucchesini at the Accademia di Musica in Pinerolo and with Aldo Ciccolini in Paris, followed by studies with Nicholas Angelich at the Conservatoire National Superior de Musique as well as with Marie Françoise Bucquet. He has received further tuition with Richard Goode, Mitsuko Uchida, Alfred Brendel. Since autumn 2015 he has been teaching at the Accademia di Musica in Pinerolo.