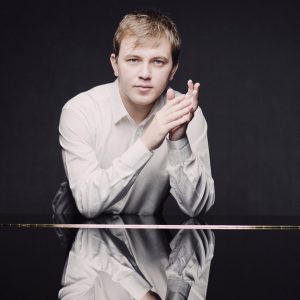 Since winning the First Prize and Audience Prize at the Telekom-Beethoven Competition in Bonn in 2015 and winning the Borletti-Buitoni Trust Award in the beginning of 2020, Italian pianist Filippo Gorini has enjoyed a rising career. His concert appearances have drawn unanimous acclaim on many prestigious stages such as the Berlin Konzerthaus, Hamburg Elbphilharmonie, Munich Herkulessaal, Società del Quartetto di Milano, and the Samsung Concert Hall in Seoul.

Filippo’s highlights from 20/21 include recitals at Mito Settembre Musica, Salle Cortot and Società del Quartetto di Vicenza, live streams from the Festival Bach Montreal and Giovine Orchestra Genovese, and a personal invite to Marlboro Music School by Mitsuko Uchida. Would have been debuts from the Wigmore Hall and Concertgebouw Amsterdam, which were sadly cancelled due to the pandemic, have been rescheduled for the next seasons. In 21-22, alongside performances at Salle Cortot, Amici della Musica di Firenze, Thuringer Bachwochen, and Società del Quartetto in Milan just to name a few, Filippo will performing with the Cameristi della Scala, be recording two Mozart concertos on Alpha Classics with the Salzburg Mozarteum Orchester and Howard Griffiths.

Most of all, Filippo will be concentrating on his multi-year project on J. S. Bach’s Art of Fugue, “The Art of Fugue Explored”. This will start with the release of the work on Alpha Classics at the beginning of the season and then continue with a docu-series involving conversations on Bach’s music with personalities such as Frank Gehry, Alfred Brendel, Peter Sellars, Alexandr Sokurov, and many more. Later on, a mobile app for the project will be launched together with a non-verbal film on the notes of Art of Fugue.

Other releases on Alpha Classics include Filippo’s debut disc in 2017 featuring Beethoven’s Diabelli Variations, which won the Diapason d’Or Award, as well as critical acclaim on The Guardian, Le Monde, BBC Music Magazine, Piano News, and his second disc in 2020 of Beethoven’s Op.106 & 111 matched this success. Filippo has also received other awards such as “Una Vita per la Musica – Giovani” of the La Fenice Theatre, the Young Euro Classic Award, and the Beethoven-Ring of Bonn.

Alongside his solo career, Filippo continues to perform as a chamber musician: as well as the Marlboro Music Festival in 2021, in 2016 he performed at “Chamber Music Connects the World” in Kronberg with Steven Isserlis, who later invited him to take part in the Chamber Music Seminars in Prussia Cove. He has also performed with the Mozarteum Orchestra and collaborated with violinists Jonian Ilias Kadesha, Marc Bouchkov, Giovanni Andrea Zanon and with cellist Pablo Ferrandez. He follows actively the world of contemporary composition, and has played works by composers such as Stockhausen, Kurtág, Lachenmann, Gervasoni, Lanza. In 2022 he will debut a Sonata dedicated to him by Federico Gardella.

After graduating with honours from the Donizetti Conservatory in Bergamo and completing a Postgraduate Course at the Mozarteum University in Salzburg, Filippo is now mentored by Maria Grazia Bellocchio, Pavel Gililov, and Alfred Brendel.