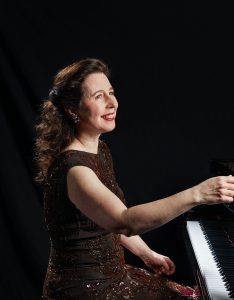 Angela Hewitt occupies a unique position among today’s leading pianists. With a wide-ranging repertoire and frequent appearances in recital and with major orchestras throughout Europe, the Americas and Asia, she is also an award-winning recording artist whose performances of Bach have established her as one of the composer’s foremost interpreters. In 2020 she received the City of Leipzig Bach Medal: a huge honour that for the first time in its 17-year history was awarded to a woman.

In September 2016, Hewitt began her ‘Bach Odyssey’, performing the complete keyboard works of Bach in a series of 12 recitals. The cycle was presented in London’s Wigmore Hall, New York’s 92nd Street Y, and in Ottawa, Tokyo and Florence. After her performances of the complete Well-Tempered Clavier at the 2019 Edinburgh Festival, the critic of the London Times wrote, “…the freshness of Hewitt’s playing made it sound as though no one had played this music before.”

Hewitt’s award-winning cycle for Hyperion Records of all the major keyboard works of Bach has been described as “one of the record glories of our age” (The Sunday Times). Her discography also includes albums of Couperin, Rameau, Scarlatti, Mozart, Chopin, Schumann, Liszt, Fauré, Debussy, Chabrier, Ravel, Messiaen and Granados. The final CD in her complete cycle of Beethoven Sonatas (Op.106 and Op.111) will be released in 2022. A regular in the USA Billboard chart, her new album Love Songs hit the top of the specialist classical chart in the UK and stayed there for months after its release. In 2015 she was inducted into Gramophone Magazine’s ‘Hall of Fame’ thanks to her popularity with music lovers around the world.

Conducting from the keyboard, Angela has worked with many of the world’s best chamber orchestras, including those of Salzburg, Zurich, Lucerne, Basel, Stuttgart, Sweden, and the Britten Sinfonia. One recent highlight was her debut in Vienna’s Musikverein, playing and conducting Bach Concertos with the Vienna Tonkünstler Orchestra. In 2021/22 concerto performances include the Royal Stockholm Philharmonic, Helsinki Philharmonic and Toronto Symphony orchestras, Orchestra Ensemble Kanazawa and Concerto Budapest (UK tour), while recitals take place in London, Rome, Leipzig, Dortmund, Tallinn, New York, Philadelphia and Tokyo, among many others. In July 2022 Angela is Chairman of the Jury of the prestigious International Bach Competition Leipzig.

Her frequent masterclasses are hugely appreciated. When all concert activity abruptly stopped in spring 2020 due to the pandemic, Angela went online to share daily offerings of short pieces—many of which form the basis of teaching material. Her fans were thrilled, and she was happy to inspire them and stay in touch.

Born into a musical family, Hewitt began her piano studies aged three, performing in public at four and a year later winning her first scholarship. She studied with Jean-Paul Sévilla at the University of Ottawa, and won the 1985 Toronto International Bach Piano Competition which launched her career. In 2018 Angela received the Governor General’s Lifetime Achievement Award, and in 2015 she received the highest honour from her native country – becoming a Companion of the Order of Canada (which is given to only 165 living Canadians at any one time). In 2006 she was awarded an OBE from Queen Elizabeth II. She is a member of the Royal Society of Canada, has seven honorary doctorates, and is a Visiting Fellow of Peterhouse College in Cambridge. In 2020 Angela was awarded the Wigmore Medal in recognition of her services to music and relationship with the hall over 35 years.

Hewitt lives in London but also has homes in Ottawa and Umbria, Italy where fifteen years ago she founded the Trasimeno Music Festival – a week-long annual event which draws an audience from all over the world.