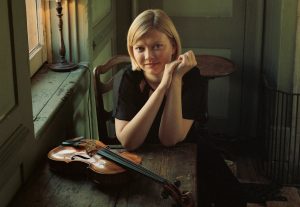 Alina has had prominent presence at the BBC Proms since 2015: aside from concerto performances, her Proms appearances have included a concert with a baroque ensemble and two late-night Royal Albert Hall recitals featuring the complete Bach partitas and sonatas. In the 2018 Proms, Alina gave the World Premiere of the Rolf Wallin Violin Concerto with the Bergen Philharmonic Orchestra, conducted by Edward Gardner. 18/19 saw a strong focus on Shostakovich Concerto’s No. 1 and No. 2, which she performed and recorded with Vladimir Jurowski and the State Academic Symphony Orchestra of Russia. Recent highlights include her debut with the Royal Concertgebouw Orchestra, Sinfonieorchester des Bayerischen Rundfunks, Deutsches Symphonie-Orchester Berlin, Swedish Radio, Wiener Symphoniker Boston Symphony and return engagements with the London Symphony, Chamber Orchestra of Europe and BBC Symphony Orchestra.

As a recitalist Alina has appeared at venues including Wigmore Hall, Concertgebouw Amsterdam, Salzburg Mozarteum, Vienna’s Musikverein and Carnegie Hall. Her long-standing duo partnership with pianist Cédric Tiberghien has featured highly successful complete cycles of both the Beethoven violin sonatas and the Mozart sonatas for violin and keyboard at Wigmore Hall. Future plans for the duo also include extensive touring in Japan and North America.

Alina is a founding member of the Chiaroscuro Quartet. Together they have toured and recorded extensively since 2005 and have become one of the most sought-after period ensembles.